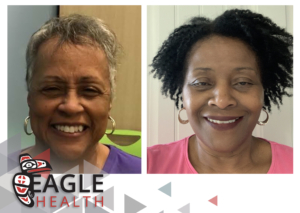 Eagle Health, LLC, a Cape Fox Corporation (CFC) subsidiary, shines a spotlight on two employees who have stood out for their hard work and dedication to the mission of Eagle Health and the contract. In August, Dorothy Hawkins and Carol Tucker were both presented with Tinàa Awards for Employee Excellence. Dorothy and Carol are Human Resource (HR) Specialists on Eagle Health’s contract with USAID Human Capital Talent Management (HCTM) Human Capital Service Center (HCSC), Civil Service Staffing (CSS) Division.  Each of these women stands out on their own, but their work on their team has garnered them praise and recognition from the customer and executives at Eagle Health.  The Cape Fox Tinàa Award for Employee Excellence is presented to employees who stand out for their dedication, performance, dependability, productivity, and attitude.  Dorothy and Carol have exemplified this, and we are proud to have them as part of the Eagle Health team.

USAID was founded in 1961 by then-President John F. Kennedy.  Today, USAID is one of the largest aid agencies in the world, providing disaster relief, poverty relief, and resources on global issues such as the environment.  In 2017, we were awarded a contract with the prestigious agency to provide human capital management and support.  Carol started working with with the Cape Fox family in June 2017, and Dorothy began in December 2018, but both women provided support to USAID previously.  Carol and Dorothy were recently recognized by our customer with a prestigious Agency award for their hard work in helping the Agency meet its goal of filling 1,600 Civil Service full-time equivalent positions.  They offer their expertise at every opportunity, and they were an integral part of the team accomplishing the Agency’s hiring goal.  They have consistently demonstrated their reliability as team players, their abilities as HR professionals, and their commitment to both Eagle Health and USAID.

Program Manager, Chelsey Vazquez, commented, “Carol and Dorothy are passionate HR professionals whose expertise in their field has been absolutely vital in ensuring USAID was able to meet their hiring goals.”

Dorothy and Carol’s stars shine doubly bright, and their display of excellence is a testament to the mission of CFC.  They exemplify those employees who stand out to receive a Cape Fox Tinàa Award for Employee Excellence. Everyone at Eagle Health is honored to have Dorothy and Carol as part of the Cape Fox Team. Thank you!

CFFI Recognizes an Employee Who Shines
Scroll to top