CFFI Spotlights a Leader Who Exemplifies Caring for Others 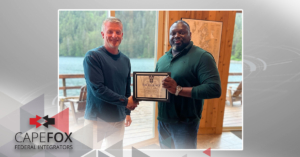 Cape Fox Federal Integrators, LLC (CFFI), a Cape Fox Corporation (CFC) subsidiary, recognizes Tyrone Smith, Program Manager and Director of Operations for CFFI. Tyrone leads his team of employees through mentorship and caring. He has proven that when you support your employees, encourage them to excel, and listen to their needs; they give back to the position in ways that have assured contract mission success as well as personal growth and accomplishment. Tyrone is a CFFI employee who has shown outstanding commitment and leadership skills, and his team has produced a high level of performance. CFFI proudly awards Tyrone a Cape Fox Tinàa Award for Employee Excellence. This award is presented to employees who stand out for their dedication, performance, dependability, productivity, and attitude. Tyrone’s thoughtful approach to leading and mentoring and his expertise and commitment to his work make him an asset to the CFFI team and Cape Fox.

Before starting with Cape Fox Government Services as Site Lead/Systems Administrator in 2013, Tyrone had a distinguished military career of over 20 years. He gained valuable experience as a Network Project Manager, Superintendent, and Information System Flight Chief, which he utilized when he got promoted to Program Manager in 2016. Tyrone’s star did not end there, though, and in 2019, Tyrone was promoted to Director of Operations. Tyrone manages two contracts with CFFI, Remote Piloted Aircraft Squadron Operations Center (RPA-SOC) and General Services Administration (GSA) 8A STARS III contracts.

Tyrone was nominated for this award by one of his employees, Senior Network Engineer Andrew Valentine. Under Tyrone’s management and due to his growing expertise on the RPA-SOC contract, his team grew, and Tyrone continued to expand the work, ensuring that CFFI is known as the “Go-To Team” or Subject Matter Experts (SME).   His team has been responsible for designing and engineering the Enterprise Boundary Solution for securing the Remotely Piloted Aircraft (RPA) networks. Next, his team is upgrading the Audio Multi-Level Secure (AMLS) system from version 1 to version 4, increasing the RPA mission’s capabilities. Continuing his mission to make the team “great,” he allowed his engineering team to take the lead in designing and integrating the Nellis Test &Training Range (NTTR) network at Creech Air Force Base, Developmental Test & Operational Test Squadron (DTOT). This design is critical to the day-to-day operation of the program and joint base operations. Finally, a new task for his engineering team is integrating a vital program for the Air Combat Command (ACC), increasing video surveillance, processing, and distribution globally.

Tyrone has stood out at CFFI because of his hard work and expertise. Yet, to his employees, he stands out for his thoughtful, mentoring approach to leading. Andrew recently remarked, “Tyrone has always said that if you take care of your people, they will take care of you. He continually mentors his leadership team, advising them to put themselves in their subordinate shoes and be fair. He has repeatedly taken the time to ensure each member’s personal life was in balance with work. He continually promotes self-growth by educating and accepting new responsibility.”

Tyrone is a leader who cares. He has created a  team that works in unison and often shares his love of BBQ during team meetings. Tyrone has a devoted, hard-working team that strives to make their work a success because Tyrone exemplifies the values of the Cape Fox Tinàa Award. We are proud to have him as a team member and leader at CFFI, and he is well deserving of this recognition. Thank you, Tyrone!

Eagle Health Spotlights an Adventurous Employee Who is Instrumental in Her ...