CFFI Awards Employees Who have Contributed to Program Success 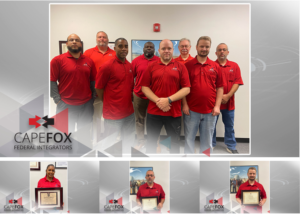 On October 15, 2021, Cape Fox Federal Integrators (CFFI), LLC, a Cape Fox Corporation subsidiary, handed out several employee and team awards recognizing the hardworking members of their team.  These awards included a Cape Fox Employee Spotlight Tinàa Award to Lekeitte Balkcom. Lekeitte began working for Cape Fox in 2014 as a Receiving Clerk. Today, because of Lekeitte’s hard work over the years, she has been promoted to Warehouse Lead supporting the Air Force Remotely Piloted Aircraft Squadron Operations Center (RPA SOC) program. Lekeitte often stands out for her job performance and expertise. Recently, she was recognized by government leadership for her outstanding dedication to locating missing vendor shipments and reconciling over $20M of warehouse inventory. Lekeitte was essential in identifying a shipment with unauthorized classified equipment; she immediately secured equipment and notified government officials. Her efforts were lauded by the site security officer and government customer.

Lekeitte’s hard work and attention to detail show her dedication to mission success. She has been instrumental in ensuring a 99% shipping accuracy rate and a 99% on-time delivery rate over the entire eight years as part of the RPA SOC program. She also assists the Program Manager in reconciling monthly shipping invoices and resolving any shipping discrepancies with shipping vendors. Lekeitte has gained the utmost respect from our RPA SOC customers because of her work ethic and dedication to providing top-notch service. Lekeitte’s Program Manager has deemed her one of Cape Fox’s most valuable assets and will be vital to taking the program to the next level.

Other awards handed out included:

CFFI is honored and appreciates all its employees.  The combined diligence, hard work, and expertise have led to CFFI’s mission success. Thank you, Lekeitte, Chuck, Ben, and the entire IT Team.

CFFI Employee Shines for his Expertise, Commitment and Service