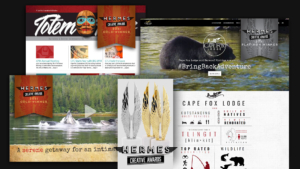 There were over 6,000 entries from throughout the United States, Canada, and dozens of other countries in the Hermes Creative Awards 2021 competition. Entries are submitted from corporate marketing and communication departments, advertising agencies, PR firms, design shops, production companies, and freelancers. Hermes Creative Awards are administered and judged by the Association of Marketing and Communication Professionals (AMCP). AMCP judges are industry professionals who look for companies and individuals whose talent exceeds a high standard of excellence and whose work serves as a benchmark for the industry. Winners were selected from over 200 categories: advertising, publications, marketing, branding, integrated marketing, public relations/communications, electronic media, and pro bono.

Over the past few years, Cape Fox has increased its digital media, branding, public relations and communications, electronic media, and advertising initiatives.  Now, Cape Fox stands out for having an award-winning communications team.  Great job, Team!

Eagle Health Spotlights a Leader Whose Mission is to Give Back to Military and...