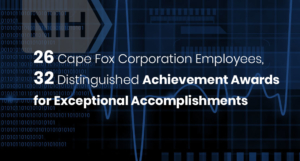 Over the last 13 years, the National Institutes of Health (NIH) Scientific Technical and Other Professional Services (STOPS) Program has recognized notable contributions of its contractors through the presentation of Distinguished Achievement Awards. NIH STOPS Contractors may be nominated for accomplishments such as improving the effectiveness or efficiency of an NIH program, developing a new process, facilitating office moves, or filling in during staffing shortages. These awards may otherwise honor employees for bringing value to the NIH in the form of substantial cost savings, database development, or inventions, and novel discoveries.

The NIH STOPS Program Management Office reviews nominations submitted by NIH Federal Task Leaders describing exemplary performance each year. For the 2020 award program, we are proud to announce that 26 Cape Fox Corporation employees received a total of 32 Distinguished Achievement Awards for their exceptional accomplishments, with a few employees receiving more than one nomination.

The following Maryland-based employees were also recognized for their exemplary service:

Congratulations to all award recipients! Cape Fox is proud of you and the instrumental role you have played in contributing to the success of the National Institutes of Health.  We are incredibly grateful for your invaluable service and wish you continued success.