Eagle Health Recognized an Employee Who Stepped Up and Stood Out 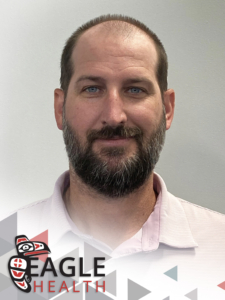 Someone you can “count” on.  In July, Eagle Health employee, Bryan Eckart, was presented a Cape Fox Tinàa Award for Employee Excellence for his willingness and dedication.  Bryan works as a Budget Analyst for the Defense Health Agency (DHA) supporting the Financial Operations (J8), Contract Resource Management (CRM), Purchased Care Budget Division. Bryan stood out when he took over the job functions after a government employee left the position.  It was a complex contract and Bryan has performed exceptionally with the new job functions.

Bryan has worked with Eagle Health on the DHA CRM contract since July 2018.  Recently the government client said, “Bryan is a conscientious worker who made an immediate impact upon his arrival at DHA-CRM in 2018.  In the short time he has worked here, he has taken on one of the more difficult contracts, the Pharmacy Contract, and has been successful in keeping the contract fully funded.   His contribution to the Budget Team as well as to CRM is greatly appreciated, along with his quick wit and humor.”

Bryan is originally from New Mexico and has worked for DHA for six years (three years in Falls Church, VA and three years as an Eagle Health contractor in Colorado). Bryan has enjoyed being able to contribute to DHA’s mission while working for Eagle Health, a company that has positive values, a commitment to excellence, collaborative environment, and a connected company culture.  The Cape Fox Tinàa Award for Employee Excellence is presented to employees who stand out for their dedication and attitude. Bryan has stood out in his profession and in his work and exemplifies the ideas of the Cape Fox award. He is a dedicated team player, and we are delighted to give him this recognition.  Thank you, Bryan, for being part of the Cape Fox Team!