Eagle Health Employee Recognized for Her Excellence in Work 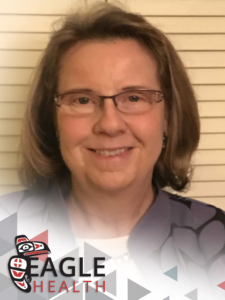 Eagle Health, LLC, a Cape Fox Corporation (CFC) subsidiary, shines a spotlight on an employee who continuously stands out for her excellent work and team contributions.  In August, Donna Stauffer was presented with a Tinàa Award for Employee Excellence.  She has consistently and continuously received recognition for her work with the United States Agency for International Development (USAID).  Donna is a Senior Policy Advisor on Eagle Health’s contract with USAID Human Capital Talent Management (HCTM) Foreign Service Center (FSC) Division.  She has worked with the Cape Fox family since 2017 but has been contributing to the work USAID does even longer.  Donna stands out to the customer and executives at Eagle Health because of her commitment to her role, her hard work and dedication, and her contributions as a team player. Donna is well-deserving of a Cape Fox Tinàa Award for Employee Excellence because she stands out as a shining light.  Thank you, Donna!

USAID was founded in 1961 by then-President John F. Kennedy.  Today, USAID is one of the largest aid agencies in the world, providing disaster relief, poverty relief, and resources on global issues such as the environment.  In 2017, we were awarded a contract with the prestigious agency to provide human capital management and support, and Donna has been one of the Eagle Health employees who has continuously stood out.  Our customer has recognized her with a prestigious Agency award for her hard work in providing critical enhancements to approaches, procedures, and tools that have collectively advanced Performance Management of Acquisition and Assistance (A&A) awards.  She was an essential part of the team that was recognized in this effort.  She consistently demonstrates her reliability as a team player and her commitment to both Eagle Health and USAID, and that is evident in the frequency in which she receives positive feedback.

Donna’s Program Manager, Chelsey Vazquez, commented, “Donna is a consummate professional whose expertise in her field has been crucial to USAID advancements.”

Donna’s dedication to her work and her consistent display of excellence is a testament to the mission of CFC and exemplifies those employees who stand out to receive a Cape Fox Tinàa Award for Employee Excellence. Everyone at Eagle Health is honored to have Donna as part of the Cape Fox Team!

Eagle Health Recognized an Employee Who Stepped Up and Stood Out