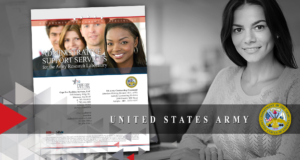 On September 25, 2019, Cape Fox Facilities Services (CFFS) was awarded a five-year multi-award IDIQ contract with the United States Army Survivability, Lethality Analysis Directorate (SLAD) and the Army Research Laboratory (ARL).  Shortly after award, a protest was issued and a stop-work was initiated by the Government, preventing all awardees from performing any tasks on the contract until the protest was resolved. On February 4th, Cape Fox was notified that the protest period had ended and the stop-work restriction was lifted, thereby allowing tasks to be issued against the primary IDIQ contract beginning on February 25th.

As the recognized corporate research laboratory of the U.S. Army, ARL is responsible for performing disruptive and Army-unique foundational research and cultivating critically important knowledge and insight that can enable future Army force modernization capabilities. The U.S. Army Combat Capabilities Development Command Army Research Laboratory was activated in 1992, with a genealogy dating back to the early 19th century, as communism in Eastern Europe and the Cold War were ending to reevaluate Army research and technological positions. It was also an effort to combine several research organizations and consolidate to make the US government research capabilities more effective and efficient. The highly trained and experienced teams at SLAD and ARL provide basic, exploratory, and advanced research in technologies and technological barriers within the current military systems.

CFFS will be providing administrative support services to ARL through the following:

CFFS is looking forward to providing the necessary personnel, supervision, materials, and non-personal services to support the mission of ARL.

CEO You Should Know