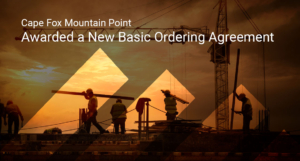 Cape Fox Mountain Point, LLC, (Mountain Point), one of the newest Cape Fox Corporation (CFC) subsidiaries, has stood out once again with our customer, the Customs and Border Protection (CBP).  On April 7, 2021, Mountain Point was awarded a Basic Ordering Agreement (BOA) with CBP.  A BOA is a written agreement between an agency and a contractor that will apply to future contracts between the two parties during the term of a contract.

CBP has a large number of projects that involve construction, renovation, and alteration or repair of buildings, structures, or real property, some requiring limited design spanning the entire United States, including Puerto Rico, at Border Patrol stations and checkpoints, and Air & Marine Operations marinas and hangars.  In addition, CBP has projects that involve the servicing, repair, and replacement of building equipment.  Mountain Point was awarded an agreement to provide the materials and the work on the construction task orders under this BOA.