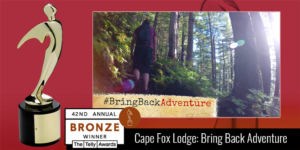 Over the past few years, Cape Fox Corporation (CFC) has increased its digital media, branding, public relations and communications, electronic media, and advertising initiatives.  This year, Cape Fox Lodge and Baranof Fishing Excursions partnered in a new marketing endeavor to entice tourists to visit Alaska and “Bring Back Adventure.”  The campaign included a webpage, press release, social media outreach, and a video ad.  CFC is proud to announce that the Cape Fox Communications Team was recognized for their efforts by winning another Telly award for the video advertising that was created.  This is the third Telly win in three years for the CFC Communications Team.  Great job, Team!

This was an awesome team effort!  The Baranof team provided some awe-inspiring footage of their fishing excursions, and our Cape Fox team came together to design the branding and messaging as well as actualizing filming opportunities around the Lodge, Bar Harbor Alehouse and The Village Store.”

In June 2021, the Communications Team was notified that they won a bronze Telly Award in the 42nd Annual Telly Awards competition.  The Telly Awards was founded in 1979 to honor excellence in local, regional, and cable television commercials with non-broadcast video and television programming added soon after. With the evolution and rise of digital video, the Telly Awards today also reflects and celebrates this exciting new era of the moving image on and offline. The Telly Awards annually showcases the best work created within television and across video, for all screens. Receiving over 12,000 entries worldwide.  While the awards have 11 main categories such as Social Media, Online, Commercials/Marketing and more, Cape Fox was awarded in the category of Online Commercials: General – Travel/Tourism.   Cape Fox is delighted to be included among this category as one of the great storytellers with our Cape Fox Lodge and Baranof Fishing campaign video.  The Communications Team is looking forward to future opportunities to be recognized.